Germantown and a sticky motel, Ohio 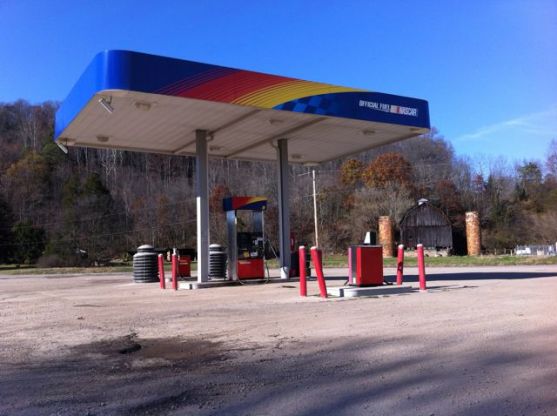 We’ve got some dull red car that Dave booked through Hotwire.com which sounds pretty dodgy, but we collected it from Hertz. Anyway, I’m off to look at Mustangs, and there’s a world-renowned dealership in Columbus, Ohio, 300 miles away south. It’s election day and Ohio is the battleground state, or at least one of them, and while absolutely no-one here seems to give a toss who wins, who loses, Bill Cunningham and his callers on News radio 700 WLW do. They don’t like Obama who wins the war on terror by not calling it a war on terror anymore. ‘Wey-ell, sorry to burst your bubble, it’s still a war’, who’s responsible for the biggest job-killing tax hike in 4 years, spending and borrowing, and ‘digging your children so deep in debt they may never get out’. ‘If I want to be a horndog no-one gives me money to buy condoms’ says a fuming caller who resents his hard-earned cash subsidising the cost of birth control pills. ‘All over America’ says Bill, ‘Republicans are coming out in droves; American people wanting to take their country back.’ 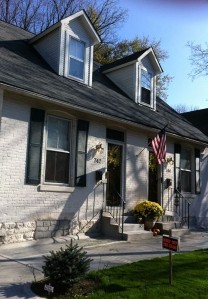 Columbus is the state capital, the usual mix of glassy blocks, flyovers, seedy auto repair and truck parks, all abruptly interrupted by Germantown, a surreally picturesque old world pocket of gentile living that covers a few blocks before the motels, pawn shops, auto repair and truck parks pick up again. Inside Germantown, the streets are cobbled, the brick houses have immaculate gables, lawns (keep off the grass), American flags flutter against blue skies and everyone is a lawyer, an architect or a primary school teacher in a little school. There is of course an immaculate park full of golden Autumn trees and people in good coats walking well-behaved dogs, and picturesque, well-attended churches. There are birds, carved pumpkins, children in jolly boots, little books shops (‘wilkommen’), little coffee shops, craft shops and galleries; even the laundrette is nice (‘Hausfrau’s Haven’) and menu in the bar ‘Max & Erma’s Cafe’ shows Max and Erma happy and in love way back when they opened the place. There’s some ladies who lunch on the next table with perfect hair and teeth talking about babies and decorating in that kind of wealthy, goat growl ‘That’s so bay-you-tay-farrrrrl. Just precious’. I think I’d like to live here and illustrate children’s books.

Dave books the German Village Motel instead of the cutesy German Village Inn.  Everything is sticky. Obama wins the election. On the other channels there’s home improvement partly sponsored by ‘its always sunny in Philadelphia, fat and creamy with jalapeno’ , someones banging on about ceviche in Nicaragua, and a writhing woman who says the only rings she is interested in are wrestling rings.

I tell Dave Mitt Romney’s won, which he believes until 5pm.

One thought on “Germantown and a sticky motel, Ohio”