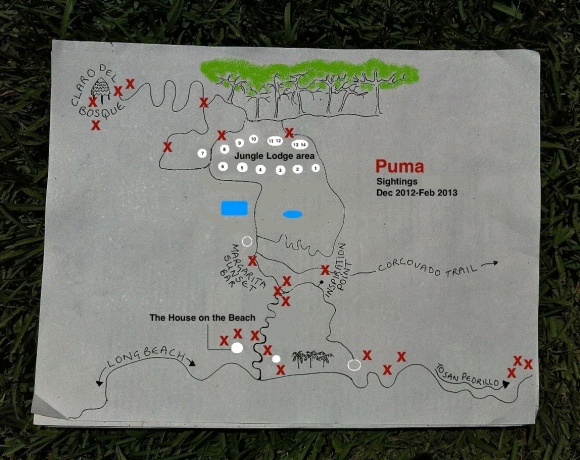 For various reasons, I am quite interested in knowing where the puma goes, and when. To be honest, it’s become a bit of an obsession. I’ve been quizzing people, and collating the data in a vaguely scientific way. I’m now keeping what I hope is a fairly comprehensive log, and I’ll add future sightings to a map, along with  date and time. In the meantime, I’ve produced a Puma Route Map to show the general range. Around 45 people work in and around this private reserve and almost all have bumped into this ‘elusive’ cat.

After sweating over maps, calendars and my scrawled notes, I can finally offer some partial explanation as to the high number of sightings. There are two pumas, as proven by two recorded sightings in two different locations at exactly the same time on January 21. It’s a breakthrough.

Two and a half years ago a mother and two cubs were spotted at the back of the lodge. I’d expected to discover that our two pumas were mother and one male juvenile, the other having gone off to find its own patch. After scrutinising video and talking to Fanny, the David Attenborough of Claro del Bosque, it seems there are two males. One probably is the grown-up cub, but the other, old and skinny, is a mystery.

From the timings and descriptions, it’s likely the older male is covering the area east and north of the lodge (in fact, I just got a call on the radio about half an hour ago to say he was having a stroll around the farm, Claro del Bosque). While the younger puma is more of a beach boy. He likes the heat. Most of the sightings have been in the hottest hours of the day, from 11.45-2.15pm, and in the hottest locations – the beach by the San Pedrillo Ranger Station, the beach in front of Carmen’s house,  the lawn in front of, and behind, the beach house (where he has been photographed basking like a Sphinx). He has no fear of people – in fact he seems to be drawn to them.

Although seen at the beach around 4pm recently, he’s generally spotted in the later afternoons in higher forest, criss-crossing the path I take home, and hanging out at the two points earmarked for hotel guests because of their spectacular views, and breezes. He uses the quebrada, concealed by thick plantain growth on either side, as a back alley shortcut from the beach to the miradors. And this is largely why I don’t.

I’m not sure where either puma is at night; that would be nice to know.  The kill and the scat left at the beach house suggests that one of them is a nocturnal visitor. Liliana, a cook at the hotel, who goes home in the opposite direction, through the rainforest late at night on the back of her son’s horse, saw a puma lying, in the way, on the trail at the back of the guest bungalows last week. So, at this stage, who knows.