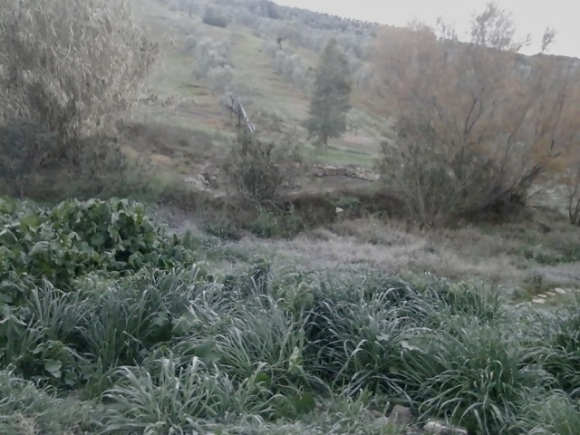 Following my last post on bright sunny days interrupted by cold nights in which temperatures plunge to 5 degrees, it’s now properly wintry. Some days look nice through the window, but they are actually not. The wind, hurtling along the gorge and sending the TV aerial into a spin (the one channel is unreachable), has ice in it. Above the farm the peaks of the Sierra de Grazalema are covered in snow, as are the mountains beyond Ronda.

Or so I’ve been told. I’m staying inside, within arm’s length of a fire, wearing so many layers I can barely bend my arms, and a blanket sarong which makes walking difficult. I type in silk gloves.

Night time temperatures are now well below freezing. Until about 11am, there’s ice in the wheelbarrow, slithers of ice on the inside of the windows, and a thick coating of frost on the olives and weeds. Most strange of all, the world appears muted and misty. It’s a fact that wherever humans live, winter seems to take us by surprise.