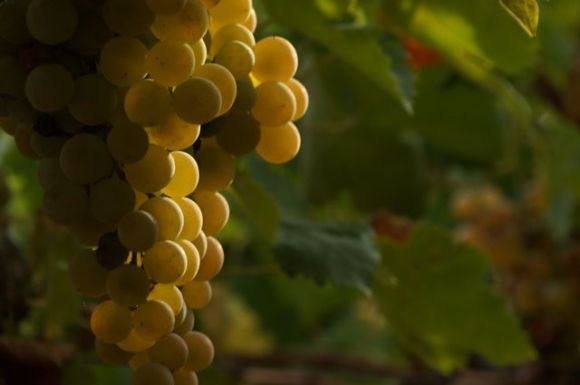 Transpires the reason there were more, and fatter, birds around this year, is that they’d been gorging themselves in the vineyard. And once they’d tapped a hole into every grape, the wasps moved in. Maybe it’s the other way round, or they work in tandem. Anyway, beyond a few rows of photogenic grapes, there were five rows of dessicated raisins, sucked dry over a hot summer spent in virtual privacy. On the plus side there were less to pick.
I’d always associated grape-picking with romantic assignations. School friends would go grape-picking in France and come back dressed pretentiously, and get letters from French boys for one or two weeks which they’d read while smoking a Gauloise on the roof of the school building. I wasn’t sure what they did over there in the vineyards of Normandy, but it certainly wasn’t the crawling along dense tangled tunnels alone, covered in burrs, batting away buzzing things that I’ve been doing here. The fact I only had about six sackfuls at the end of it was fine by me.
I have no idea of the weight of six sacks other than heavy, my measure is man hours. It took me three man hours to pick the grapes, and a further four man hours to pick off the woody stems as we don’t have a machine to do it. I was helped at that point by two friends who really chose the wrong time to arrive. We used a wine press borrowed from Fernando – a barrel with a heavy plate you wind down (and down and down and down, and then up and up and up and up), and pressed the grapes three times. Last year I made around 85 litres – although some was lost during an infamous Spill! during the filtration process. This year I reckon I produced the grand total of around 20 litres, which equates to 3 litres per man hour. Artisan.
Ready-made local wine is available from down the track for about 85 centimos a litre. Still, I don’t want to leave the fruit withering on the vine and all that.