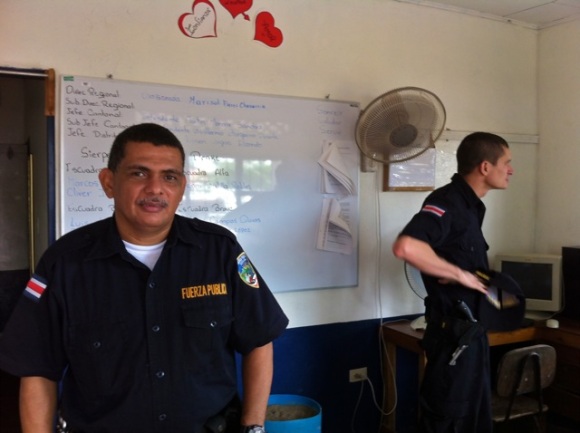 Sometimes in the dead of night I hear the low droning thrum of a boat moving fast, from south to north. I’ve stood outside in the pitch black to look, but there are never any lights. It’s likely they are drug boats running up the Pacific from Colombia to Mexico and the United States. The traffickers strip them right down in order to carry the maximum amount of fuel and cocaine, paint them grey, pack on powerful engines, and they pass by here, not far off the coast, usually around 3am.

Since January of last year, there has been a coordinated multinational effort to patrol Central America’s coastlines. Operation Martillo, as it’s called (martillo meaning hammer), has necessitated or enabled (depending on your politics) an unprecedented level of US involvement in Costa Rican security. Homeland Security keep tabs on trends in trafficking, and the conclusion of a recent subcommittee hearing is that most drugs from Colombia no longer go north via the Caribbean, but travel up this coast, the Pacific coast. Presumably they’ve stepped up the number of patrols, but if so they must be focusing on the Central Pacific area around Manuel Antonio, because there’s not much going on round here.

Possibly, ironically, as a consequence of the threat of patrol vessels, instead of attempting to shoot past Costa Rica, traffickers have been avoiding the interception hotspots by landing the drugs in remote areas along the coast to be collected and moved on by road.

Costa Rica’s vast, unpopulated, jungly national parks, protected by a woefully small number of guards and volunteers, make an ideal drop off point. A few abandoned drug boats, signs of drug trafficker camps, new, rough roads have been found, along with the occasional trafficker and cocaine haul. Round these parts there’s little distinction between the parks and the sparsely-populated peripheries – in fact there’s a fine specimen of a Colombian drug boat that was found in the labyrinthine mangroves now parked beside the kiosk-sized police station in Sierpe.  Some 15 tons of cocaine was seized in – and off – Costa Rica last year, a record high. But there’s also plenty of evidence that much more is getting through – more drug consumption, more drug-related crime, revenge killings between rival traffickers, more cash in private banks, more money laundering, and more suddenly wealthy locals.

Moving drugs across land has to involve a degree of local cooperation, and for low paid workers the temptation to be ripped off and dragged down into criminal activity for what appears like high returns, can evidently prove too much.  More pitiful than the recruits are those people who find packages washed up, or stashed in the undergrowth, and decide to make off with them.

Some years ago, I wrote about how teenagers, some as young as 14 and 15-years old, were setting up business as drug lords in Belize City after finding waterproofed packages of cocaine on the beach. Whole areas of Belize City were out of control at that time, as child-dealers protected their turf with semi-automatics, and their penniless buyers mugged and murdered – often their own families – for the cash.  I spoke to an old woman who’d had her gold teeth removed. Not nice. Some of the packages had intentionally been dropped from boats where they would float ashore roughly in the area of  of a designated pick-up point, others had been jettisoned. Either way, there was always someone looking for their lost property.

A few months ago, I was swimming by a ranger station where some packages of cocaine had just washed up. The rangers radioed the police and the Guardia Costera arrived to collect them. Around the same time, the watchman at the next remote property along the coast from here, went missing. They say he found something he shouldn’t have found on the beach, and that blood and signs of torture were found at the property to suggest he was made to give it back. When I was next in Sierpe, I spoke to my friend at the police station who said they had continued to search for him for eight days but with no luck; that they could only hope that he’d got away and gone into hiding.

Anyway when I hear those boats I keep my fingers crossed they just keep going, but I can’t see everyone returning to an age of innocence any time soon.